Dads have cool ideas for adventures. Adventuring is cool. They can do realistic light saber sound effects, they have bachelor degrees in the art of air guitar. They have endless stamina for silly voices and, indeed, an endless ream of silly voices from which to choose.

Dads, and this is a big one, can grow MOUSTACHES. And moustaches? Cool. 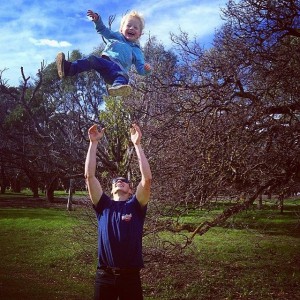 I’ve come to the conclusion that good dads may actually be good dads because they think like kids. They have limited attention spans and can flit from one gloriously fun activity to the next without any thought. Where I might spend lengthy periods meticulously setting up textas and crayons, little super hero masks for sticking on little perfectly cut out people, barn yard sticker sheets for stickering, googly eyes and pipecleaner arms.. All to be swiped from the table after five minutes of focus (sob sob)….Dads! Well dads are at the ready to leap into the next activity, focus be damned!

More cool dad facts; Dads are really good at explaining things. Why do trees have leaves? Why do dogs smell each other’s butts? Why don’t ducks wear pants? If ducks did wear pants, what colour would they be….And other such important questions related to every day life. Dads have the answers and the wherewithal to delve into the nitty gritty details.

I’ve come to realise over time that my husband, who is in my humble opinion, a blessing to the gene pool, is not only a great dad, but he’s also arguably a better mum than me too! Cool in a crisis. Loving. Tirelessly patient. Willing to wipe rogue boogers away with bare hands if necessary. Tedious. You’re encroaching on my territory buddy. Step back. He’s unflappable, almost irritatingly so. Nothing phases him. Not the dog vomiting up Joseph’s technicolor dreamcoat all over the rug. Not the escalating argument about who “winned” at eating dinner. Not the house being hidden under a fine layer of lasagna. He’s the proverbial cucumber. Cool as.

Further to this point, my 3 year old son recently told me bluntly that his twin sister loved me but that he loved daddy. Right. The gentle explanation about how these two things don’t have to be mutually exclusive didn’t appear to have the cut through I’d have liked when he responded with “I love daddy the better”. Ummm. Ok then. Who am I kidding? I love daddy the better too.

Another great thing about dads. Dads have unwavering commitment. No one can build a sand castle like a dad can. That engineering marvel will have a moat, a draw bridge, six sky high turrets and a fully functional seaweed flagpole… and you better believe it will be to scale. And after its done, a dad will happily be buried neck deep in sand next to his kingdom, to the point of near suffocation, with two dead legs and a smile on his face. Because; commitment.

Recently I received a text message from my husband while he was at work telling me that he and his (firefighter) colleagues had just sung the entire Giggle and Hoot lullaby word for word. “How sad” he commented. Not sad. Awesome! Prime example of great dad-ness. Anyone who can sit through The Night Garden in its entirety, time after time, and still be a functioning and coherent human with lyric learning receptors at the ready at the point in which Jimmy Giggle sings Hoot’s Lullaby…well that person gets two enthusiastic thumbs up, a pat on the back and a license to be in charge of the baby’s overnight bottle feed, from me.

All jokes aside, it is an absolute pleasure and a joy to watch my husband with my kids. Watching him has inspired me to be a great mum; to be more fun, to have more adventures. Sad fact of life is that not all dads are great, not all dads show up, and some great dads chances of fatherhood are unfairly cut short because sometimes life sucks like that. These things I remind myself of, when my husband comes home without most of the shopping he was supposed to collect because the list was folded and he didn’t look at the bottom half. Having a partner who is willing to be a great dad makes it easier to be a great mum (even if he is better at it than I am). And who knows, maybe one day I’ll be able to grow enough of a moustache for both of us.

I originally wrote this post for ivillage.com.au. If you loved it so much (of course you did) that you want to read it again (of course you do) you can also check it out at ivillage. While you’re there, take a look at the other stories I’ve written by visiting my ivillage author page.

One thought on “My husband is a better mother than me!”