Feeling a liiiittle bit like Ellen right now, welcoming my first guest post to eenie meenie miney mum. When Emma from life kids and a glass of red proffered up this little beauty for me to share, I couldn’t resist. Because Star Wars. WTF? This is something I can get on board with.

My husband is a Star Wars fanatic, in fact he’s more machine now than man, twisted and evil.  For those playing at home, that was a Star Wars quote I just threw in there; I don’t know whether to be proud or ashamed. Let’s just forget I ever did that.  Moving on. Star Wars, WTF. I’ll let Emma take it from here….

Is it an XY chromosome thing

I’ve previously written about being a mum of boys and how I just don’t understand why they do certain things. Here’s my latest one that I just don’t get.

Maybe it’s a chromosome thing, only applicable to the XY combination in males.

But what is with the obsession with Star Wars?

I can kind of understand it being of interest to those who were born in the generation when it was first released at the movies. But it seems every male I meet, regardless of their age, can quote lines from the movies, name the characters, and do an impressive impersonation of a Wookie. But there seems to be so many kids who are obsessed with the intergalactic adventures, and half of them haven’t even seen the movies! So where does this interest come from? Is it genetic? The whole nature vs nurture? I just don’t get it.

I ended up buying my husband the boxed DVD set of all of the Star Wars movies one year. I figured that as we had boys, it was going to be inevitable that they would all become fans, as that is apparently what happens. I might as well steer into the skid instead of fighting it. I’ll admit I’ve seen all the movies. I’ll even admit that I’ve fallen asleep during them (once on a date – the guy involved was not impressed), but they are not my first choice when selecting a movie.

Is it the fact that the characters get to go on all sorts of adventures with their friends? Is it the space travel stuff? Is it the light sabres? 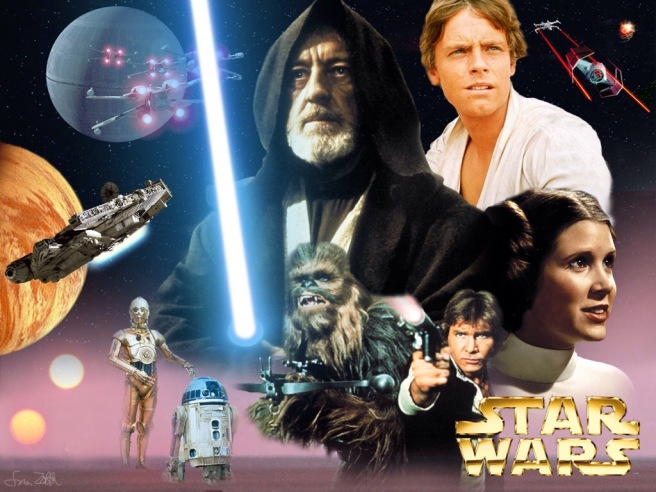 When our eldest son was in preschool, the interest in Star Wars started. Without any prompting or influence from us, all of a sudden, sticks became light sabres. Accompanied by the correct sound effects too, might I add.

He would hum the tune of the Imperial March over and over and over again, until I would swear that my ears were bleeding. He hummed that tune every day, for 18 months. I am not kidding. I would fall asleep to that tune being stuck on replay in my head. At this point, he had still not seen any of the movies. Where was this coming from?!

If you’re not sure what the Imperial March sounds like, I dare you to google it, listen to it, and then try and have it removed from your brain.

When we eventually let him watch the original Star Wars movie (Episode IV), he was beyond excited. He sat, without the slightest fidget, for the entire movie. A look of complete awe on his face the entire time. The final stage had been completed. He was now obsessed.

He has requested that his birthday cake this year be, wait for it, the Millenium Falcon. What is this, you ask? It’s the space craft thingy (yes, that is the technical term) Hans Solo has. And I am to somehow create a birthday cake that kind of resembles it.

I am no cake making expert, believe me, I have had many a disastrous birthday cake experience, so I am somewhat nervous about this request. Perhaps I just make a birthday cake in the Star Wars theme, like a light sabre. But then with my bad luck with birthday cakes, it will probably end up looking more like a wonky penis. Not what you want for a kids birthday party…

So back to the whole nature vs nurture argument. Star Wars seems to be overlapping these two categories. Call me controversial, but I fully believe that most boys are born with an in-built interest in Star Wars, along with vehicles and transport, believing farts are hilarious and how it is somehow necessary to wrestle indoors. Perhaps though that interest in Star Wars can be turned to borderline obsession when growing up in a house of males, as opposed to females?

What do you think? Is it just an XY chromosome thing?

Are your daughters obsessed with Star Wars? Are you a fan? 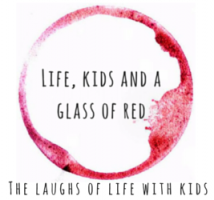 About Emma from Life, kids and a glass of red

Emma is a mum of two boys, has developed ninja-like instincts to avoid stepping on Lego left on the carpet, and would love to run a half marathon someday. And loves chocolate (and red wine!), but who doesn’t?

Holy guacamole…It’s not often your snack matches your outfit 🥑 @the_oodie @oodie_squad
Day 121 at home and the dog is looking at us like, “See? This is why I chew the furniture”.
OK but you can’t prove I planned this outfit in advance tho.
Every new @kiddomag deserves a glass of bubbles or 3 🥂
Can we talk about #officegoals right here? Behold the pink and red combo ‘o’ my dreams that doubles as the day to day working space of @besuperfierce and yes I am jealous. Red retro refrigerator... check. Rainbow balloon garland... check. Custom neon lighting... check. Not one but TWO, I repeat, TWO mirror balls... check, check! My dowdy corner ikea desk in my living room “office space” is shaking in its boots right now. 😆
Surrounded by inspiring women who make the world a better place and motivate me to be the best version of myself [and who also accept the amount of swear words that leave my mouth in any given sentence] @rebeccamorse107 @alexisteasdale @carlottachambers @miriamweir. Launching @mumamoo.au 👶 🍼 ps I have never looked shorter.