In my three and a half years as a parent, I feel like I’ve learned more than I did in the whole of year eleven high school. The lessons your children can teach you are frequent, varied, sometimes painful and often to the detriment of the tenuous remains of your social dignity. And for me, almost always learned the hard way.

Let me just say, in the last few years I’ve been receiving quite the kiducation.

Not just in limitless, unconditional love and boundless tolerance for scraping dried weetbix from the floor and copping accidental duplo figurines to the temple (if I’m really lucky, simultaneously), but also really useful life skills like how to go about effectively positioning yourself in an airport public toilet in such a way that when your baby who is strapped to you in an ergo carrier, vomits, it doesn’t go inside your underpants like it did last time. Glamour.

I feel so much better equipped to face life since having kids (unless it means putting a bra on, in which case…no). Out of the many wondrous and relevant life lessons my children have taught me in the last three and a half years, I give you a whole nine that I’ve found translate to legit life skills for the betterment of every day functioning.

My three year old daughter has a vocal frequency that transcends auditory sensation and I’m quite convinced allows her to communicate with dogs via ultrasonic sound waves, higher than the upper audible limit of human hearing. The kind only seen prior to now in fork lightening or bats. I have never known anyone with a voice that is not only loud but emits on a such a particular frequency that it can be equated to the prehistoric predatory call of a young terydactl tailing a scent. This is a skill. Considering I have to say “it’s dinner time” approximately four hundred and thirty seven times before anyone acknowledges I’m even capable of human speech, it is not one she has inherited from me.

When you hear the toilet flush followed by the words “uh oh”… It’s already too late.

Watch what you eat.

As it falls to the floor.

And when you do feel hungry, only eat soft bread and crayons. Carbs and colours. Because; food groups. My children are lithe, lean and full of energy (particularly at 6:30am when it seems, somehow, to be severely lacking for me) so it’s clearly working for them.

Everyone likes to feel good about themselves. It just makes you feel downright warm and fuzzy when you have your make up done for your only fancy event in the last year and, when your child sees you, he asks what happened to your face. And, speaking from experience, there’s nothing like the heady bafflement of being told by your three year old, daily, that you can sing better than Harry from One Direction (but not Louis… Excusez moi????)
Which leads me to…

I’ve said it before and I’ll say it again. Drunk people, children and leggings always tell the truth. And the truth sometimes hurts (and, in the case of leggings, stretches very thinly across ones thighs). And other times it makes you think perhaps you should audition for X factor. Again, possibly to the detriment of the worn and dangling thread of your remaining dignity.

Kids notice things. They have brilliant bullshit-o-meters….aside from the whole Father Christmas, Easter Bunny and Tooth Fairy charade, but we have to allow them minor transgressions for that which we have drummed into them for purposes of loosely veiled threats and frequent occasions of necessary bribery.

Kids can always tell if you only pretend to put honey in their natural yogurt instead of actually doing it. They will know the toy they used to hit their baby sister on the head is not really in the bin (unless you really do put it in the bin, in which case….you little rebel, I like you). As it happens, they also have a good read on people. Case in point: when Taylor Hanson comes on TV and your toddler looks him up and down and remarks “he doesn’t have any friends, does he?”

If when you grow up, you want to be an dinosaur or a secretary, you work towards those goals. Don’t let anyone hold you back. Shine bright like a dino.

Except if you’re Igglepiggle. For the last time mate, only Upsy Daisy sleeps in Upsy Daisy’s bed. You’re on your own buddy. 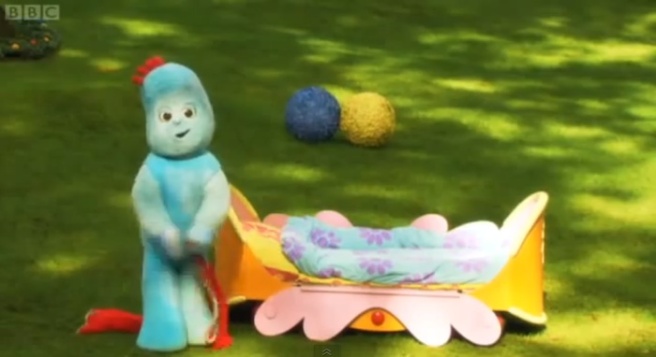