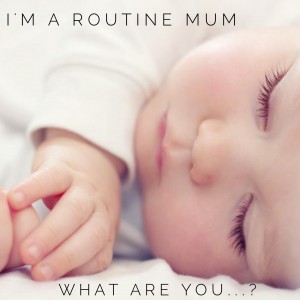 I like to pretend that I had no choice but to be a routine parent because I began my motherhood journey in a cold sweat at the obstetrician being told I was expecting not one, but two babies. At once. Together. Both at the same time. Or nine minutes apart as it turned out. Yes that’s right. My uterus was playing caretaker to twins and upon their birth I was going to be expected to take care of them! Two of them! Two babies! One, two. And as I quickly discovered, all the books say when you have twins you need to implement a routine.

And that is the comprehensive and detailed, analytical account of how and why I became a routine parent.

Frankly, I was always going to be a routine parent, whether I had one baby, two babies, or an irobot vacuum cleaner under my care. I think it harks back to my days as an impressionable fifteen year old playing parent to a very needy, life sucking, attention requiring, 3V battery powered tamagotchi. I took that shit seriously, for realz. With the tragic death of tamagotchi after tamagotchi due to my lapse in feeding and/or bathing and/or putting the infernal mechanical grey blob with legs to bed, I was branded with a life long interminable complex that I might, in fact, kill any living, breathing, entity that some crazy universal life giver decided I was ready to be responsible for.

As such, even my indoor plants have a routine. I’m not kidding.

As an aside, just quietly, I’m not great at the whole notion of being relaxed about things. I can’t even wear relaxed fit boyfriend jeans. I am a human in dire need of structure! In life, and in casual weekend wear.

There are absolutely some benefits to being a routine focused parental unit, and admittedly some drawbacks.

So I’m doing a little two part feature for anyone who might care about my opinion (#noone). This month I’ll focus on the many and varied excellent reasons that being a routine parent is an absolutely fantastic way to go about mum life! Subsequently, next month I’ll look at the reams of legit reasons that going down the route of a relaxed parenting style instead, has undeniable benefits.

Both methods have pros and cons, you’ve just got to decide which way suits your family better and most importantly, what works for your child! And hopefully this might help if you’re trying to figure out which way to go 🙂

You can make plans around your routine. Sure, the baby might squash those plans in its tiny, chubby little pink fists by waking earlier than expected or sleeping long, because babies are tiny dictators and they like to remind you who is really in charge on a daily basis, lest you forget it. But when you have a set routine you can at least loosely make plans around it instead of having no idea what’s happening when, thus constantly flying by the seat of your pants.

Similarly you can use your babies routine as a legit excuse not to do something. I love this one. “No I can’t go to Auntie Myra’s to look at her slide show of photographs from her recent trip to Africa. The baby is sleeping then. I know, such a shame, I would have loved to spend the whole morning looking at forty seven thousand photos of the same elephant from a variety of different angles. Devastation stations. Oh wellllll. Maybe next time”.

The package delivery guy knows when he’s allowed to ring the door bell. I’m not kidding. You can train them! Thanks Jack from Australia Post Parcel Post – love you forever.

Babies are creatures of habit. They like to have a sense of a what to expect. It’s about consistency and predictability. Babies often thrive in this environment as it minimises their anxiety. Each of my babies has slept better as a result of having a solid routine, and more sleep makes me a happier human who is less likely to burst into tears watching an episode of The Bachelor or because I can’t find the cheese grater. This is better for everyone in our household.

Having a routine gives you the illusion of having control. For us power hungry control freaks out there, this is a magical feeling, particularly as sometimes life with a baby can feel like free-falling from a hot air balloon with no parachute onto a bed of frozen Lego. In your pyjamas. I love control in its many and varied forms. Cruise control. Birth control. The remote control. Control top hosiery. Control control control. Routine makes me feel like I have control over something…and I like it.

An overtired baby is not your best friend. Having a routine can help combat overtiredness because you can work the timings of your routine around suitable awake time for your babies age. Babies who aren’t overtired are extra lovely. This is a scientific fact.

I’ll be honest, routine is not without it’s downsides. Feeling like a prisoner in my own home for instance; sometimes I do feel like a slave to my own routine, living and endless Groundhog Day after Groundhog Day with about as much patience as someone with absolutely no patience. There have also been times I’ve had to sacrifice social occasions for the sake of the routine and knowing that taking my kids out of it will only slap me in the face later when they’re unsettled, out of sorts and overtired. So it’s not perfect, but what is?

So now you know my very official, on the record, may be used against me in the court of public opinion, thoughts about being a routine parent. Check back next month to find out how having a third baby challenged my nicely implemented routine and a look at some of the pros to having a more relaxed, laissez-faire parenting approach.

One thought on “I’m a routine mum”