The prospect of flying with children is probably enough to give anyone a moderate case of the “who needs a holiday anyways”.

However, as a person who loves travel and now a parent of three young apprentice humans, I’ve had the dubious pleasure of flying with kids multiple times in the last four years.

It goes without saying that there are distinct differences between travelling solo and travelling with a set of your very own miniature noise makers. 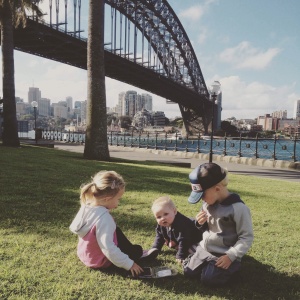 On a recent family sojourn to Sydney which seemed like a good idea at the time, I pondered these differences at 36,000 feet as my 9 month old exercised her democratic right to bad timing of the messy poo variety and my two three year olds proceeded to inform the entire plane of how hungry they were at thirty five second intervals.

Sit calmly and quietly in the departure lounge, playing with your phone, sending “we’re about to board” text messages and googling all the amazing fun things a single, independent, carefree perrson can do at their designated, non family friendly destination, that are more fun than anyone else is going to have in their entire lives. 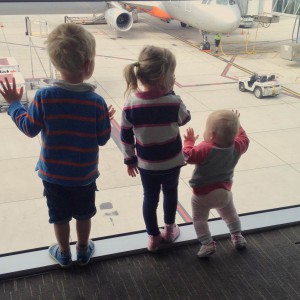 Pace the departure lounge repeatedly requesting that your young children refrain from rolling all over the floor and/or climbing over seat backs, using your most convincing “I’m a patient, tolerant, exemplary example of a mother and I’m currently in a public place” tone of voice.

Buy food in an attempt to suppress the irrepressible constant movement and noise level of small children who like to narrate their every thought and bodily function for anyone and everyone in the surrounding area.

Clean up uneaten, semi masticated food from the floor whilst fielding “I’m still hungry” complaints which is kid speak that translates loosely to “I’m bored”.

Stand in line with small carry on baggage and ticket in hand. Wait to board the plane.

Stand somewhere in the vicinity of the line with four bags, a baby on one hip and no freakin clue what you did with your ticket.

Try in vain to move the whole family forward in line whilst contending with a serious case of sudden onset floppy limbs from one child and attempted escape to the travellator by the other, as your baby attempts to give you a surgery free nose job by undertaking an enthusiastic game of nostril tug of war with your face.

Attempt to excite your children into submission by loudly discussing the aeroplane’s many thrilling mechanical features. Oh LOOK that’s the WING of the plane. And there’s the ENGINE. ISNT THIS EXCITING??!

Board the plane and find your seat. It’s in row 5. Silently pray that you’re not seated with the guy that smells like last nights dodgy curry or that lady with the three kids.

Board and make your way to the last row of the plane, so far back you’re practically riding shot gun on the tail  wing next to a giant white kangaroo.

Jostle the children forward while a good proportion of the other passengers avoid eye contact with you by way of silent prayer that you’re not seated anywhere near them.

Undertake hostage negotiation proceedings regarding the window seat whilst pushing your eight carry on bags under the seat in front so that any small amount of leg room you may have had before, no longer exists.

Make apologising eyes at everyone in the surrounding seating for what they are about to endure.

Keep playing with your phone with the vague background sound of someone with a plastered on smile giving robotic instructions on how to survive the impossible.

Field mile a minute questions about why there’s a slippery dip coming out of the plane on the emergency evacuation procedure pamphlet, when we might get to use aforementioned slippery dip and why the air hostess is wearing floaties if she’s not going swimming.

Delicately try to extricate the emergency evacuation procedure from your babies mouth. Cue hysterical crying of the variety that no one in the surrounding seating wants to hear.

Give emergency evacuation procedure pamphlet back to your baby.

Feign indifference as your eyes silently scream I’M TOO YOUNG TO DIE and your three year old daughter practises her comedic timing by screaming “we’re out of control!!!!!”. Explain loudly more for your own benefit than that of your children that turbulence is just like being on a bus driving down a bumpy street.

Read your book as the pilot lands the plane.

Explain each noise and change in altitude as it occurs with the precision and accuracy of someone who failed aeronautical mechanics. Watch on as your son, who “wasn’t tired” for the entire flight, falls asleep just as the landing gear meets the run way.


So, they say life isn’t about the destination, but rather, the journey. That may well be true, but when it comes to holidaying with your kids, even though I do absolutely love it, I have to admit that if the journey involves catching your child’s vomit in your own hands, it better be a bloody good destination.

8 thoughts on “Flying: with kids versus without kids”

Leave a Reply to Life, kids and a glass of red Cancel reply