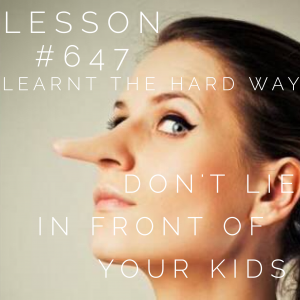 As a parent I’ve learnt many lessons along the way. Important lessons, life affirming lessons, lessons I perhaps wish I didn’t have cause to learn.

Things like the fact that everything I ever said or thought about having children before I had them was bullshit. (Insert blanket apology to anyone I ever spoke to about parenting before I had done it myself here. Yes I was an asshole.)

Things like… if one of your kids says they need to do a poo, and you’re out, never ever suggest they hold on until you get home and think that’s going to work out in your favour.

Things like…the colour white should be avoided at all costs. (See above if in need of further clarification)

A lot of these things I’ve learned the hard way.  As is the season of my life.

Of all the things I’ve learnt in my four years of motherhood though, wouldn’t you think by now I’d have the simple things sussed?

The answer to that is no.

Before I deliver my sad and sorry cautionary tale, I just want to caveat it with a small disclaimer pertaining to my moral compass.

I like to think I’m a pretty good person; honest, decent.

I return shopping trolleys to the trolley bay instead of leaving them adrift in the car park.

When I frequent the self service checkout I don’t put avocados through as apples because it’s cheaper (that’s called stealing people!!).

When a pedestrian is approaching my vehicle and I’m reminded that I haven’t locked all my doors, and I then do so, I feel immediately wracked with guilt that the person in question might think I thought they looked like a car jacker. Which I probably did. But I have the decency to feel bad about it.

So. Now that we have established that, in a general sense, I am not indeed satan’s sidekick…

Recently, we decided to take my three kids to the zoo. We have a membership and go often. As most people with zoo memberships would know, they’re pretty pricey but worth the expense if you use it a lot because going to the zoo and paying full entry fee every time is basically the equivalent monetary value of taking the whole family out to eat at a five star restaurant three times a week. In Denmark.

My twins have just turned four (note: just turned…an important distinction in the story that is about to unfold before you) and our littlest is 14 months old. Our zoo membership is up for renewal in a few months time, at which point, we will, and rightfully so, have to pay a little extra because two of the kids have now reached the age at which they qualify for a “child membership”. Up until the point at which they turn four, they enter free of charge. Happy days. When we renew in a few months time, I figured we’d add on the twins and proceed as normal.

This particular day in the members line, however, I noticed that the lady behind the counter was asking people the age of their children, even people with infants clearly not at the four year cut off point. Something I’d never seen done before in three years of membership.

I’m not going to lie, I panicked.

Was she going to ask us? What would I say? The twins had only just turned four, surely we weren’t going to be expected to pay entry fees for them when our membership wasn’t due to be updated for a few months?

We approached the counter. Handed over our cards.

“How old are these children?” she asked as my son simultaneously requested a gorilla stamp.

I pretended not to hear. Busied myself with presenting small hands for inky gorillas that would inevitably end up smeared across their faces and clothes.

“How old are these children?” she repeated.

God damn her for being diligent and performing her job to a high standard.

Prayed my husband would speak.

First time in his life.

“Uhhhh, little Rosie here is fourteen months old” I said as if she were asking for her own personal interest in our family dynamic as opposed to the identification of ticket evaders. “And Henry and Tilly are almost four” I practically vomitted onto the counter.

I was a liar. Straight from the pit of hell.

Trying to shuffle my children forward so as to avoid further questioning whilst simultaneously avoiding any and all eye contact, a small voice piped up

“We ARE four mummy”.

I was not prepared for this outcome. I should have been. I raised these children. I know they glory in any and all opportunities to prove me wrong.

But they NEVER ask ages at the members ticket counter. I honestly did think we didn’t have to add them to our membership until renewal, I wasn’t planning fare evasion ahead of time, it wasn’t an elaborate ruse designed to deceive the good people of the zoological society, it just snuck up on me and all of a sudden I was committed.

“You are four?” The ticket counter lady addressed my daughter for the first time as though she were a small soothsaying, truth telling messiah.

Oh come on lady. Cut me some slack. The kid also thinks farmers pick bacon off pigs like they do apples from trees. Who are you gonna believe here?

“Yes we are!” Tilly said forcefully and almost jubilantly.

And here is where I entered into a heated disagreement with my small child about her own age, in front of the ticket counter lady and the queue behind me, knowing all too well that she was right and I was wrong. And I’m pretty sure everyone around us knew the same thing.

“No you aren’t… What are you talking about?”

I nudge her foot with my foot behind the counter as if she is old enough or well versed enough in the art of deception to understand this gesture to mean shut your adorable little pie hole before mummy has a mental breakdown.

“We already turned four” she admonishes me in a tone so loud and shrill she could probably have communicated with pterodactyls in the Jurassic period.

My husband remains mute, letting me flounder and flap around like a suffocating fish in the throes of death on a jetty in the blazing sun.

Jesus Christ, what did I I just say?

It doesn’t even sound like I believe myself at this point.

But no mother would be crazy enough to lie about their child’s party TO their child, right?

I have not made eye contact with anyone at this stage besides my daughter who is looking at me as though I have lost the capacity to access the neocortex of my brain, and since the lady behind the counter appears not to be continuing the line of questioning nor restricting our entry, we shuffle our kids through the gates as Tilly gets more and more indignant about being told repeatedly she is three when she is actually four, and disagrees with me so loudly that populations of small mountainside villages in China can probably hear us, as I feel like my face is burning with the heat of a thousand suns and all my vital organs are systematically shutting down.

The moment we are out of eyesight of the ticket counter my husband and I address each other for the first time since the great ticket evasion scandal of 2016 in a flurry of thanks for throwing me under the buses and why did you say thats and well what would you have saids.

I feel physically sick about both the lie itself and at being outed as a liar in such a spectacular fashion, not to mention the sheer embarrassment of actually thinking it was a good idea to tell an untruth in front of the human megaphone that is my four year old daughter. (Might I note that her brother was so preoccupied with the stamp on his hand he was oblivious to the fact that any altercation had even occurred).

So what was supposed to be a relaxing afternoon at the zoo turned out to be an afternoon spent nauseated, sweaty, palpitating and hyper paranoid that every zoo employee that walked past us, every little cart whizzing in our direction, was in fact security coming to confront us and ultimately eject us.

I actually came close to legitimately soiling myself when a groundskeeper approached us to ask if the barbie doll he had found belonged to us. I then went to great lengths to describe in exacting detail the little girl that I knew it did belong to, who I had seen, because I am a decent god damn human being god dammit.

I was afraid to even leave the zoo because to do so meant walking past the front counter again and I was certain we would be accosted by a waiting team of angry zoo employees ready to publically humiliate me in the manner in which I had come to agree, in the hour I had spent mentally flagilating myself over my spontaneous display of dishonesty, that I deserved.

So after much avoidance of actually leaving and finally attaching ourselves to a group of people leaving at the same time we were, we did make it out relatively unscathed, I’m not still holed up at the zoo hidden in the nocturnal house stealing their wifi to write this blog. Of course I do have a generous helping of self loathing and an ongoing loss of dignity and self respect to deal with. But what’s new?

I have a fucking birthday party to organise.

27 thoughts on “Lesson #647 learnt the hard way: don’t lie in front of your kids (unless you want this to happen) ”