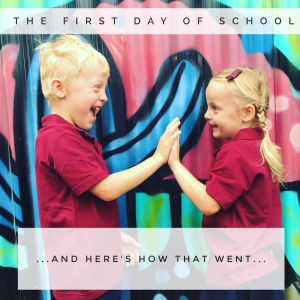 It is no secret that I have been silently mouthing GTFO of my house behind the backs of my five year old twins since abbbbouuuut day  three of the summer holidays.

In fact, I was pretty confident [some may use the word ‘smug’ even] that come January 30 I was going to be gleefully hand balling the two of them through the school gates and skipping merrily home doing a little something that looks like this…

…on my way to becoming deeply entrenched in a little something I like to call “enjoying doing as little as possible and then resting afterwards”.

It will surprise approximately ZERO people that this is not in any way what happened. And that, in fact, my pilgrimage home from dropping the twins off at their first day of school looked something more akin to this:

I woke up at 6am. This in itself was a strange and perplexing anomaly, but I chose to assume it was just Christmas Day/Birthday/The Bachelor Tuesday-like excitement.

And then something unfortunate happened.

I got out of bed, tripped and fell into a glass case of emoshun.

So I did what any normal person does when they are feeling all the feelings and then feeling feelings about them.

I channelled it into a thunderous rage.

I rage shoehorned myself into my jeans. [Which is a lot harder when you haven’t dried your legs properly, at least that’s what I’m telling myself and I won’t hear any differently from anyone who has another opinion so can we please stop talking about it thank you very much].

I rage made breakfast.

I rage photographed them in their uniforms looking adorable and grown up and excited.

And when my husband dared readjust my top as we left the house so that part of my bra wasn’t showing?

Except, like, decidedly less Ryan Gosling which triggered a little extra rage on the side because; obviously.

I literally t-rexed my way up to their school, holding their hands within an inch of their lives, and half way there started thinking very helpful things like:

“They are my first babies”

“This is the start of the rest of their lives”

“After this point they will spend more time at school than they will at home with me”  [a fact which had, only a week earlier, sent me into a wave of unadulterated euphoria].

We sat outside the classroom and I avoided talking to anyone, or looking at anything or doing anything with my face that might be even remotely akin to moving it.

The teacher opened the door for the crowd of students and parents to enter. The twins were pretty keen to get amongst it. I proceeded to feign an indifference to punctuality at odds with my usual painstakingly fastidious ‘I would rather die a slow and painful death and proceed to the pits of a fiery hell than be late’ personality and said “I’m not ready”.

And then a few moments later; “I’m not ready”.

And when the kids asked for the third time…

And every time I said it became more true.

Because all of a sudden, I wasn’t.

I wasn’t ready, because in so many ways, Henry and Tilly are my life. They are the two little souls that made me into a mother for the very first time, that taught me how to even be a mother; the two little people I had poured my heart and soul into, that I had shaped and moulded to be confident miniature humans who had absolutely no qualms about walking into that school room on their own and leaving me behind.

I was so incredibly proud.

But I wasn’t ready.

And there wasn’t a damn thing I could do about it.

So we got up and we walked into that classroom and in a split second they were gone, happily playing and socialising and not giving an actual fuck about where I was. And all the other overjoyed parents were there excitedly chit chatting with each other as they watched on and I was like:

So in the end I just sat in the corner next to a teepee and cried, and then in a ridiculous overly cheerful voice that doesn’t actually belong to me, proclaimed to people who barely knew me that happened to be in earshot “of course I’m the one crying”, ha ha ha, ho ho ho, look at how hilarious it is that I’m crying like a pathetic fucking idiot, and this is all just a funny anecdote we’ll tell at a dinner party one day! YAY ME!

My husband who is not Ryan Gosling got to the point where I think he could see things going downhill fast [NB: all the other parents were leaving with ecstatic glee in their eyes and I wasn’t] and pried my claw-like hands off my son as I sobbed how proud of him I was and he looked at me from behind the wooden block fortress he had just built [like a LITERAL wall between us that had suddenly appeared sob sob wail wail] like I had gone actual full blown INSANE, and my daughter laughed at me jubilantly for “happy crying”.

We walked home in silence until my husband who at this point is still not Ryan Gosling [sigh] said “are you OK?” which completely broke the seal all over again, and he was treated to another one of these excruciating moments:

And then we got home and I pulled myself together with a strong coffee, a pair of yoga pants and a little bit of calm the fuck down you weirdo and realised I now only had a two year old to look after and a whole glorious six and a quarter hours stretching out in front of me…

And all of a sudden things started to look a whoooooole lot brighter, and there was [finally] a little bit of this involved! 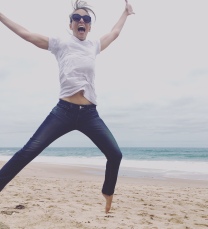 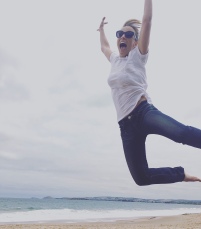 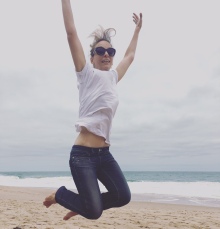 10 thoughts on “The first day of school; so this is how that went”