So when most people think of a bloke having a mid life crisis, they probably think of a frosted tipped, post-Idol Andrew G going through some kind of spiritual metamorphosis on a snow covered mountaintop in Tibet and emerging from the other side as “Osher” [and we all subsequently googled “why did Andrew G change his name”… or maybe that’s just me and my new unhealthy obsession with Osher and is anyone else as disturbed as I am about how much I know about his life now?]. 🤷🏻‍♀️

Or, to use a less ‘I’m-going-to-be-served-a-restraining-order-if-I’m-not-careful’ example, it looks like Tom Cruise jumping on Oprah Winfrey’s couch that one time.

But what does a woman having a mid-life crisis look like? Well I think she looks a bit like this:

Cos I’m pretty sure I’m in the inelegant throes of a midlife crisis. I mean, can you even have a midlife crisis if you don’t have a life though? 🤷🏻‍♀️ Signs point to yes.

But maybe I should call it a mid-30’s life crisis, because the prospect of 35 being the MIDDLE of my life is fucking terrifying.

I mean, don’t get me wrong I’m not Demi Moore-ing it with Ashton Kutcher or joining Snapchat or anything drastic like that, but I do own a leather jacket now.

And there was that one time I went into Rip Curl and tried on one of those hipster felt panama hats and took a photo of myself and posted it to Instagram as though the hat actually belonged to me.

If I was actually a legitimate Instagram ~influencer [a la all the ex-reality TV contestants with their protein shakes and their teeth whitening sponsorships] I’d definitely be accepting any and all offers of free dermafillers because facial paralysis is scientifically proven to be 87.4% better than wrinkles. I did write an entire blog about how I found a grey pube, and then there was that one time I flirted with the 19 year old check out boy at Woollies and afterwards saw another checkout boy mouth to him “ooooooh LUVVAHHHHs” over the conveyor belt and now I have to drive 3km further to get my groceries every week at a different store.

It doesn’t stop there. I got my hair cut off after literal YEARS of scoffing over and flat out refusing the “mum bob”. I ran a half marathon. I travelled interstate to see a band I’d seen in my own state the night before like a desperate road-groupie who may or may not be in love with a Hanson brother.

Running away from my mid thirties

If you don’t get a medal did it really happen?

I bought a newer, cooler car. I got a gym membership [and signed up for a class called Bootybarre FFS]. I applied for a reality TV show [and, somewhat alarmingly for my family and my reputation, nearly got chosen].

In what is probably the most supremely surprising hint that something is amiss a la brain de moi, I bought CACAO and have started making “healthy” recipes that include superfoods and like 157 litres of coconut oil [which is fucking expensive FYI and now I have even less money for cosmetic surgery and this is not OK].

And as if all that wasn’t enough, a year and a half ago I had an existential life crisis after googling my own mysterious symptoms and was convinced I was dying for a good 8 months of 2016. Multiple scans, X-rays, invasive [read; expensive] tests and not just reaching, but eclipsing, our medicare safety net later it was established that I was not, in fact, suffering an incurable disease but instead that I was just freaking the fuck out over nothing. But not a moment before I paid $395 to have a neuropsychologist tell me I don’t have early onset dementia. Excellent. [This is all a story for another day which I promise I will share when I feel like losing 1/3 of my readership because they can’t relate to what a psychopath I am].

So as midlife crises go, maybe that sounds reasonably harmless. Like, clearly hysterical, and borderline unhinged, but harmless nonetheless.

That was until I got a tattoo. 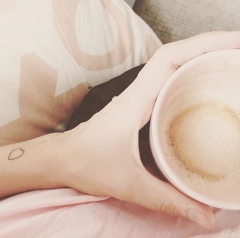 That’s right, you read it here first. Unless you saw it on Instagram where I actually put it first, because; obviously.

Or you may have heard my mother loudly sobbing from whatever corner of the globe you’re at. That was before she got snarky and started telling me one of my tattoos looked like a cartoon sperm and how I won’t be able to donate blood now because apparently it’s 1986 and I might have AIDS and I got my tattoo done in a backyard alley way behind a Thailand prison with a rusty shiv. Mmmkay mum. Calm your bosoms.

And then I got ANOTHER tattoo like two minutes later. Because, you know, I was paying for a minimum 90 minutes needle time and the tiny suburban mum having a midlife crisis tattoo of a miniature heart I got on my outer wrist took approximately 148 seconds and dammit I’m going to get my moneys worth bitch.

And if there’s such thing as a mid-life crisis where you just wanna try like all the cereals, I’m in the midst of that too.

I feel like I’ve given enough evidence here sufficient to prove like, four, midlife crises, let alone one. But whilst experiencing these things, I have also come to a few epiphany sized conclusions.

OK that’s the only conclusion I’ve come to. But it’s GOOD right?

Oh, and since it’s impossible to know which period of my life is actually the middle, I’ve just decided to have an ongoing crisis, which is like… much more palatable.

Truth be told, at x=20+15 [algebra y’all], I still feel young but have the clarity to actually just care less about what people might think and really there’s actually no sense in not doing the things that make you happy. Even if those things do include ridiculous post workout bathroom selfies in the gym change room.

Don’t hate me cos I take gym selfies

If you want to live low key YOLOish, just do it. And yes I do realise I’m not only three years late to be using YOLO because YOLO is no longer a thing, but I’m also too old to say YOLO, but I don’t care, and you know why? YOLO!

One thought on “My mid(30s) life crisis”

I hate it when you offer someone a sincere compliment on their moustache and then suddenly she’s not your friend anymore 😆
Every few months it feels like I birth another baby 😂😂😂 @kiddomag The Fringe issue is here and as always it was a joy and a pleasure to put together and get out there, but like any birthing process, there was a bit of pain, and a fair bit of swearing! Totally love the finished product, and as with children.. you couldn’t possibly have a fave (except the one who’s currently sleeping lol) but I do REALLY love this cover 🥳🥳
Valentines Day isn’t really up our alley. 🙃
I know I’m supposed to be looking forward to the school holidays being over and shooing these three back off to school and being able to actually sit at my computer to work for five seconds without someone needing a snack/drink/bandaid/argument adjudication/splinter extraction... but tbh I HATE when they have to go back to school. This is where people laughingly tell me to homeschool... Ho Ho... ha ha... NO. Colour me unqualified. But I miss the little feckers when they get swallowed up by the school system for another year!! Can’t be the only one!? A friend told me once that you only get 18 summers with your children and CANT TALK SOBBING!!! If that’s true than for the twins I’m halfway through already and I’m not ok with that!! This is why people keep having babies isn’t it? 😂
Lately I feel low-to-medium -level claustrophobic by the idea of no international travel for... God Knows How Long™... I cure this by combining ice cream with hot chips, sunshine and sticking my head in the sand. If I don’t think about it, it’s not happening... that’s absolutely definitely how it works. Side note; children look at their dad holding hot chips like he is the second coming of messiah. Starchy carbs are our religion.
Getting ready to see the back of 2020 be like.... 🙌🏼